Tommy took his first out of utero trip to Michigan. He had been there twice before, Thanksgiving when we told my parents about him and in January after a business trip to Atlanta I surprised my mom and had a baby shower. While we were gone John and his family painted, fixed up and moved us into our new home. They did tons of work and I very much appreciate all their efforts.

Thomas got to meet my father for the first time while there. 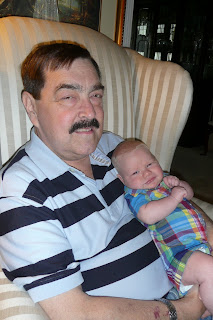 My little brother, Benjamin, got his eagle scout while we were there. (The reason for the trip, congratulations Ben). All the family except for two spouses were able to make it. Unfortunately, mine was one who was unable to come. As my mom promised though, I had tons of help with Tommy. Being the youngest and cutest grandson, no offense Jasmin or Kelly, made for many willing hands.

We even took a shopping trip to Great Lakes Crossing. That was a nice change for Tommy because the majority of his shopping trips thus far have been either to Lowes or Home Depot. Lacey enjoyed being in the back with Tommy and Charlie.

During the trip we made and gave my father his father's day gift. Jasmin and I had a tough time with the three youngest handprints, but surprisingly we got all the handprints without paint on clothes!

I enjoy traveling. It's just too bad that airlines make it a horrible experience. Tommy was very happy on all of the flights and I had no problems with him, thankfully. We left Michigan for Washington on Wednesday evening. The flight from Detroit to Salt Lake City was delayed, so of course we missed our connection, the last flight of the evening. Thankfully I had enough diapers and wipes in my diaper bag as this is all we had.

We were offered a hotel, but instead we called up John's grandma who lives downtown SLC, Edna Wolfgramm, and spent the night with her.

We made it home on Thursday afternoon. It's interesting that my luggage spent all night in the airport yet couldn't make it on our flight in the morning. My mother-in-law, Sherrie, picked us up and brought us to our new house. I must admit, when I first walked in I was very overwhelmed by all the unpacking left to do. But I was impressed that all the painting was finished and progress was being made. Not that we had doors or working bathroom sinks, but who needs those right? Unfortunately, we will this weekend when my mother comes to visit...

John was very happy to have the two of us home and I know Tommy was glad to see him again. Tommy wanted to give his daddy a haircut when we got home, but since I wouldn't let him have the scissors he opted to brush his dad's hair instead.