Tommy was blessed this Sunday, July 19th. My mother flew out a week early to help me with the baby as John and I still try to turn our house into a home. My mother was very helpful and even organized the kitchen for me! Even now she knows where things are better than I do. My father joined us late Friday evening and on Saturday helped me install our over the range microwave. It shouldn't have taken long, but like everything in this house problems arose as we went. But thankfully it is up and working now! 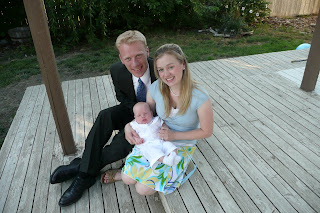 For his blessing Tommy wore an adorable outfit which Rick and Nicole purchased for their little boy, Caleb, and it will be used for any future blessings of the boy cousins. They also have the first little girl blessed so they are generous enough to get the dress for all the girls. The blessing was done after the sacrament, which worried me a little as Tommy had been very content up until that time and I thought he would be crying so loud you couldn't hear the blessing. Thankfully our little angel child was silent the whole time.
.
After the blessing is said it is customary for the dad to hold up the baby so that everyone can get a good look at the baby. John, being the proud father he is, decided that simply holding the baby as you walk back to your seat wasn't quite enough for how adorable Tommy is. John held up Tommy in front of him and then raised him up high. Think Lion King. 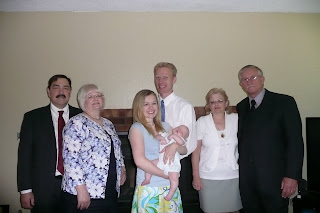 After John sat back down Tommy was sleepy and was passed around from Maren to Keilani and then to Sherrie. Tommy has a habit of one large blow-out or near blow-out every morning so I brought a change of clothes for him. After sacrament was over Sherrie still had Tommy and John told me to bring my parents and aunt Johnnie and uncle Jim (who came down from Spokane for the occasion, featured in the picture above on the right, my parents are on the left) to Sunday School, therefore not getting a chance to change him. Poor Sherrie. Not only did Tommy leak all over his cute little suit, but he got it on Sherrie's skirt! I guess he knew it was a special occasion and celebrated in the only way he knew.
.
Everything with Tommy is an adventure!
Posted by Desirée at 12:13 PM